I was searching for a way to present these magical creatures as something immaterial, ghost-like, or at least to evoke that feeling. It is like if they were to be angels of some sort, protecting the world but from what? Or who? Looking for this soul connection between human and beast, I found Spirit as a really cool name to define them. It derived from suggestions and conversations I had with my friends and also from the way ideas were merging and connecting together in my head at that point. 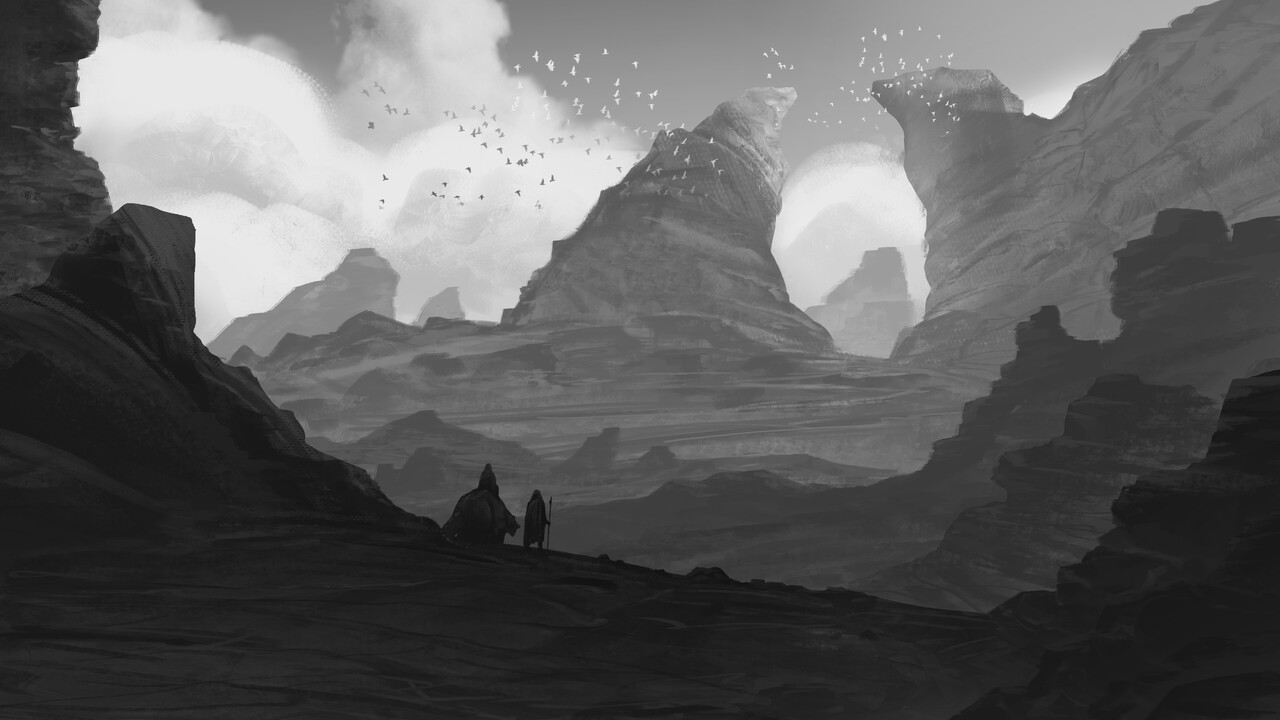 Then there was this thing flowing through both of them, the connection, the bond. Something I called "the essence" in early development. It is like the blood of the world, a vital energy spreading across the entire set of skylands. I just wanted to mention that I struggled overthinking about the origins of these creatures and how they were created. Then I started to think about their life cycle, their biological features and so forth. Granting them magical abilities of different levels was something that got me really excited. I even considered adding glyphs or marks to show the cultural symbols of this ancient civilization. Everything was possible at this point. 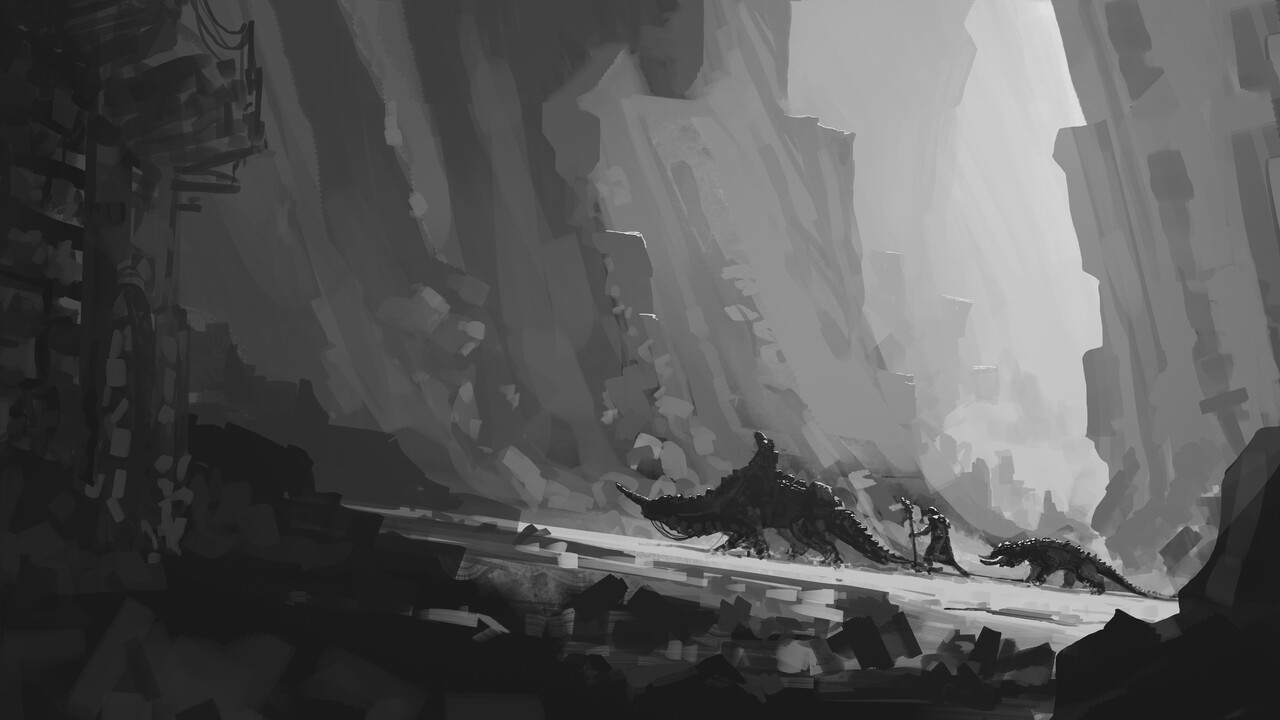 Old sketch that turned to fit perfectly into this project. It is as if it subconsciously already started long ago.

So as I initially worked out the foundations of the world over and over, trying different combinations hoping it would help me understand everything better before committing to such details, Atlas, which was the name I wanted for the main beast, was later used as the name of the celestial being who created this world. The way this came to happen will be mentioned in the story at some point. I needed a name for the opposite mood, this distant remote land of darkness and death. A hellish landscape home to the antagonistic force. This entity's name has gone through several changes during the development of the project, as well as the place itself. In the initial version it was sort of like a different distant dimension with an evil twist, another reality. I ended up putting it within the same realm but as another distant location. By the time I am writing this It is known as “The Underworld”. 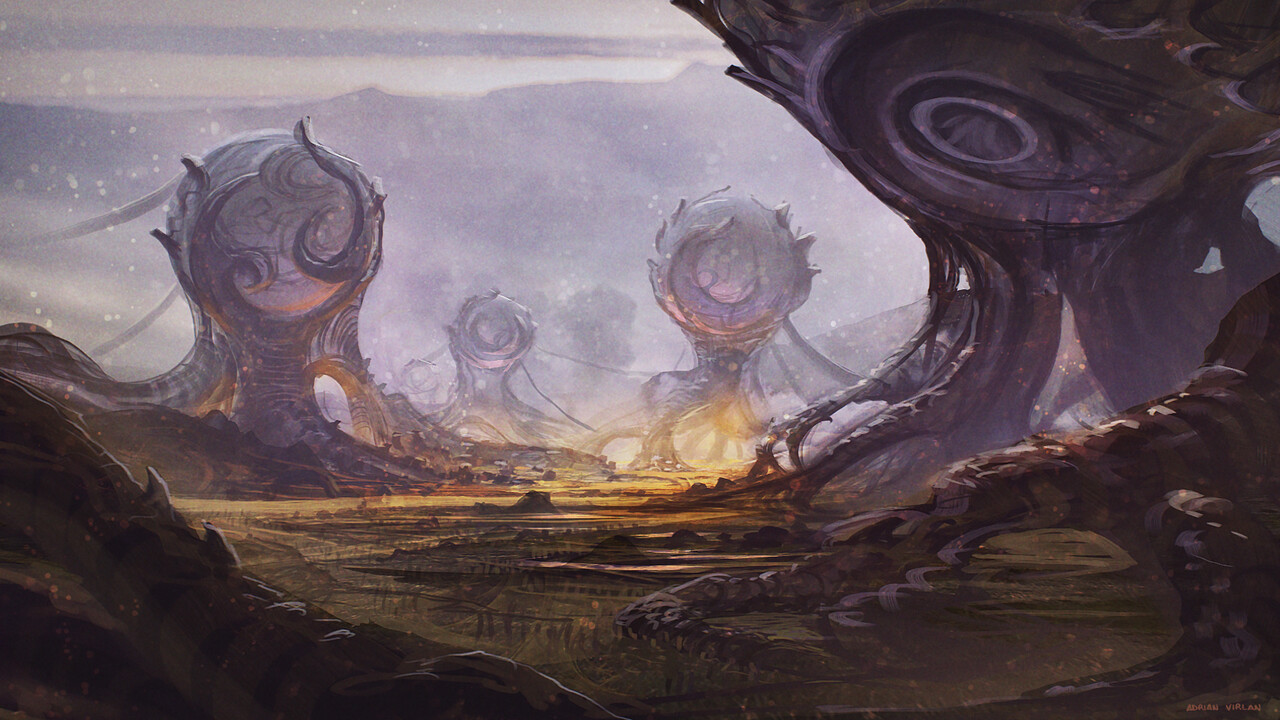 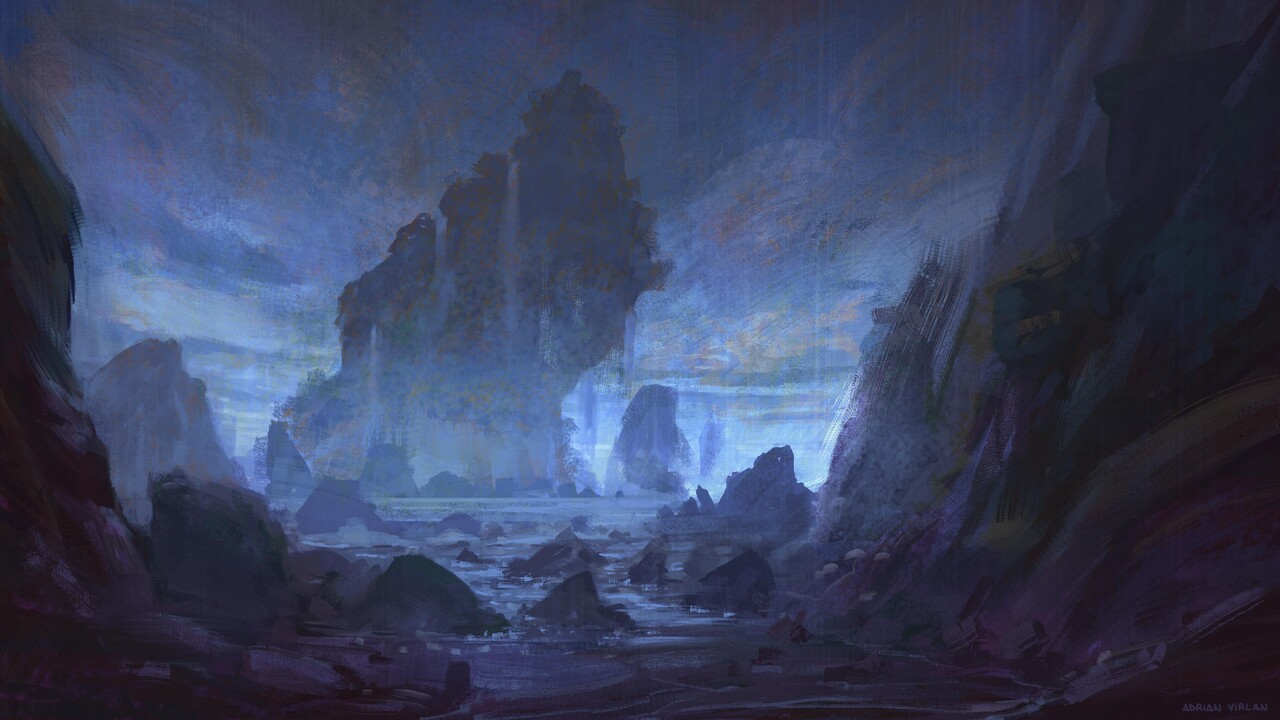 Early sketches of visual approximation of atmosphere-generating organisms and overall mood and feel of "The Underworld".

Below the extensive surface and body of what's known as "The Misty Void", a very deep ocean of clouds surrounding Hevenia, we can find The underworld. A place where sunlight never shines due to the thickness of the giant smoky shield created by fungal organisms to protect their zone as they keep conquering Atlas. This is how the bad guys would be able to live down here. This environment would grant them certain advantages. I thought them to be like black smoke creatures who can float around and move very fast in a sort of non material form. They still don't have a name but they respond to Nhemess’ commands, the antagonistic entity who fought Atlas in the beginning. That battle originated from two celestial colossal beings unexpectedly bumping into each other while sailing through the never ending universe. 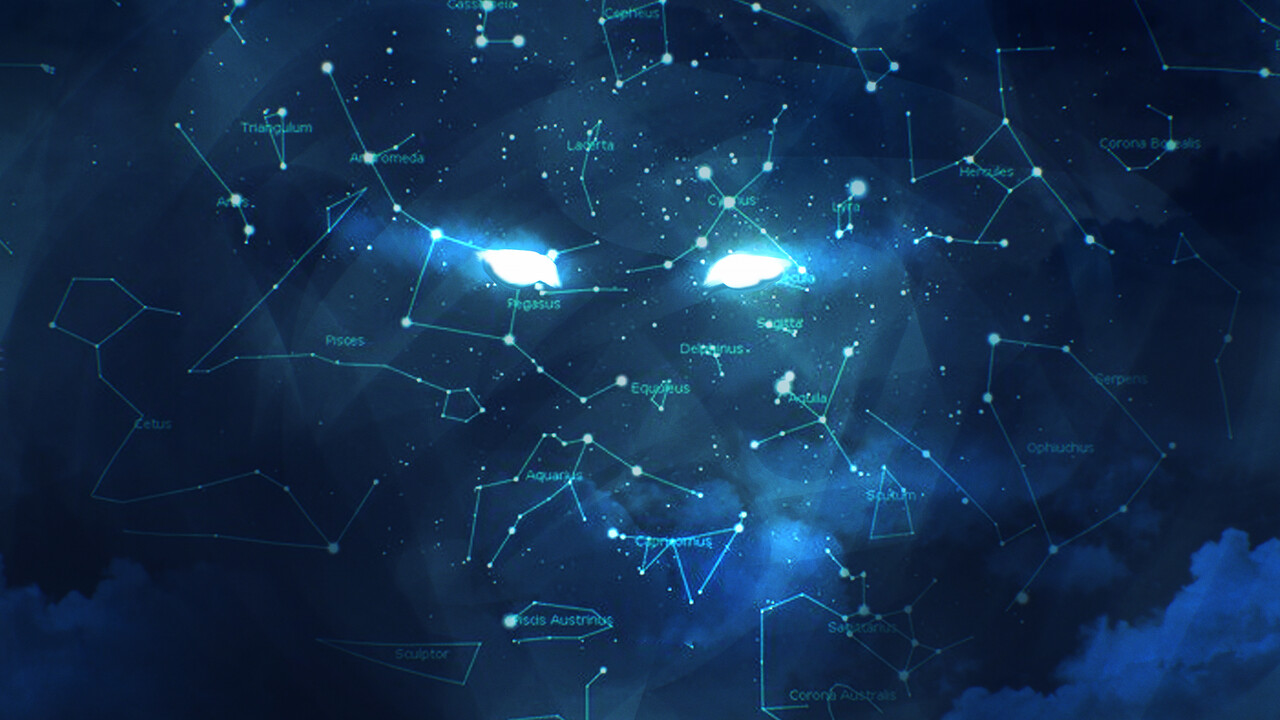 First attempt to depict a celestial being in ethereal form.

When I was still at the beginning of all this, I thought of the possible implementation of a sailing culture, ocean related stuff and concepts, since I was inspired by real stuff from my life. And as far as I am concerned, my very name means "The one who comes from the sea". Although I didn't want my project to turn into a novel about sailors, I did manage to implement this concept into the project thanks to feedback from trusted circles. 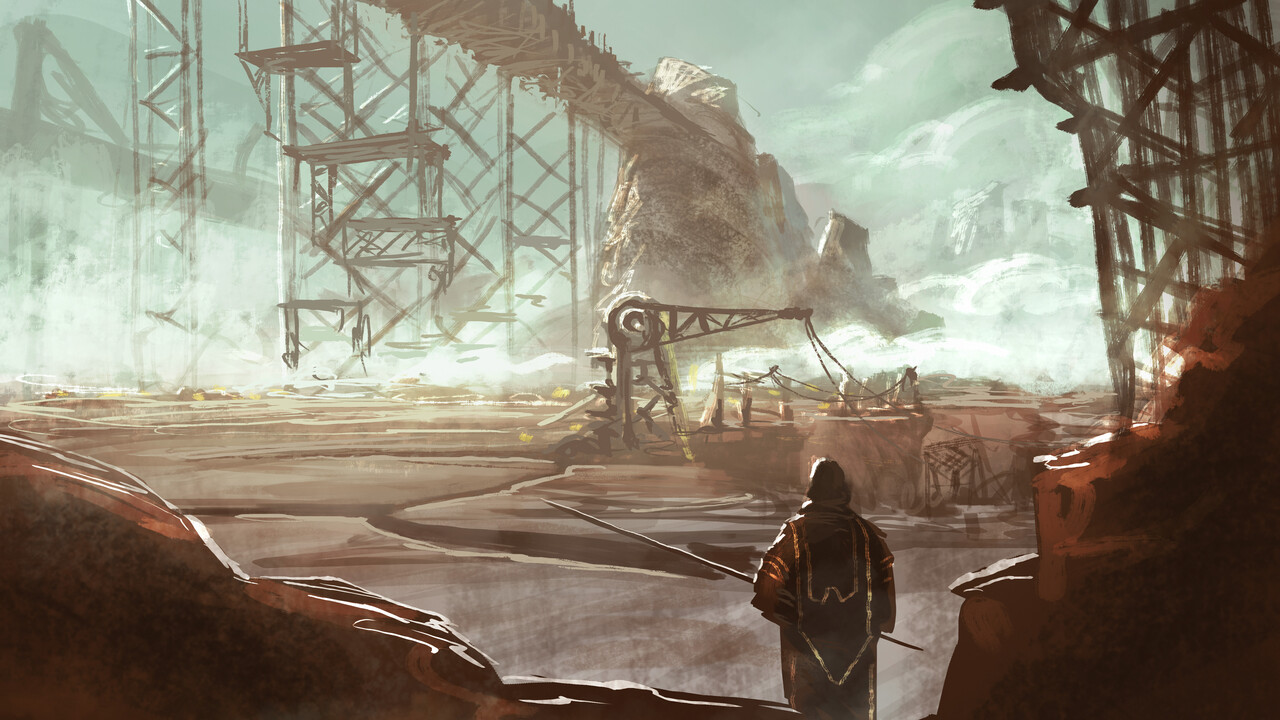 Atlas managed to defeat Nhemess. Greatly injured, his wounds let him no choice but to transform into the physical realm of reality, becoming Atlas as the world during the eternal recovery process. This world would be the physical manifestation of the old Celestial. Nhemess on the other hand lost this confrontation in the eyes of Athlas, but this turned out to be one of her clever tricks. Although she managed to greatly injure him, she knew she was no match against such power in ethereal form. Sacrificing herself was part of her strategy. So now, after sneaking part of her consciousness into the wounded celestial, she attempts not only to respawn, but also to conquer and defeat the now weakened titan from inside of him. But to do so, she would need to commit to the rebirth process that could take thousands of years. 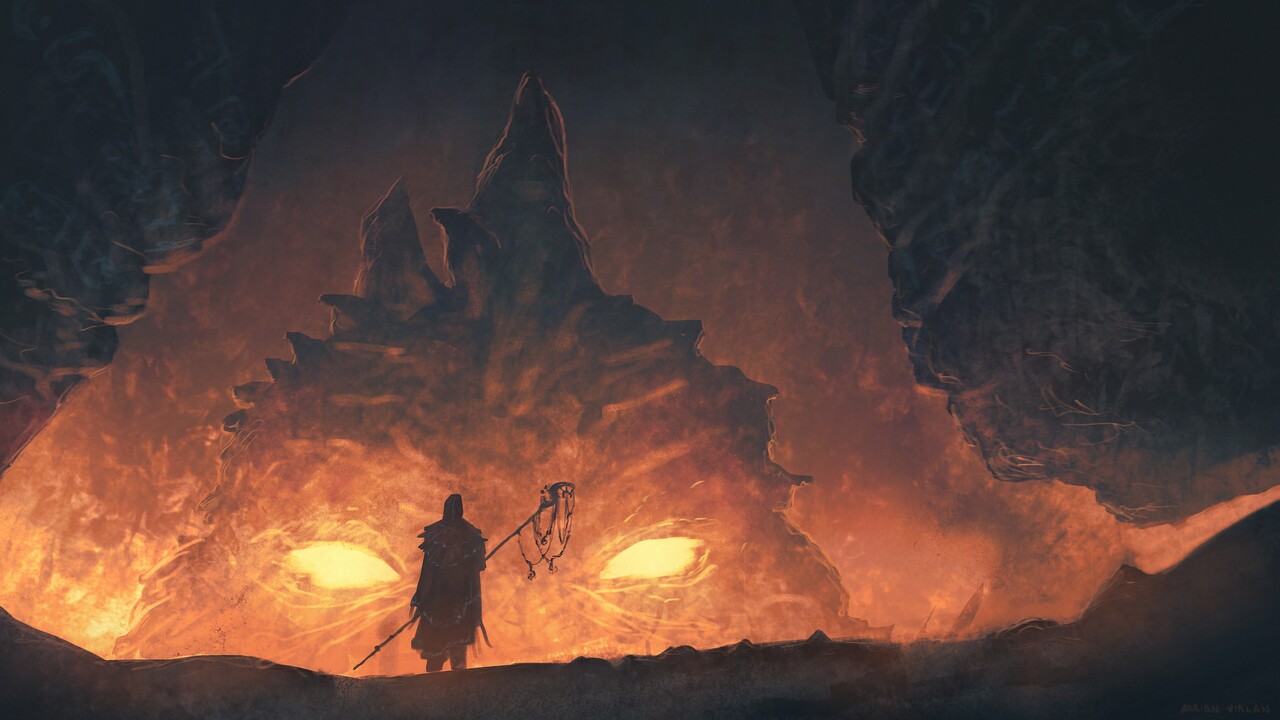 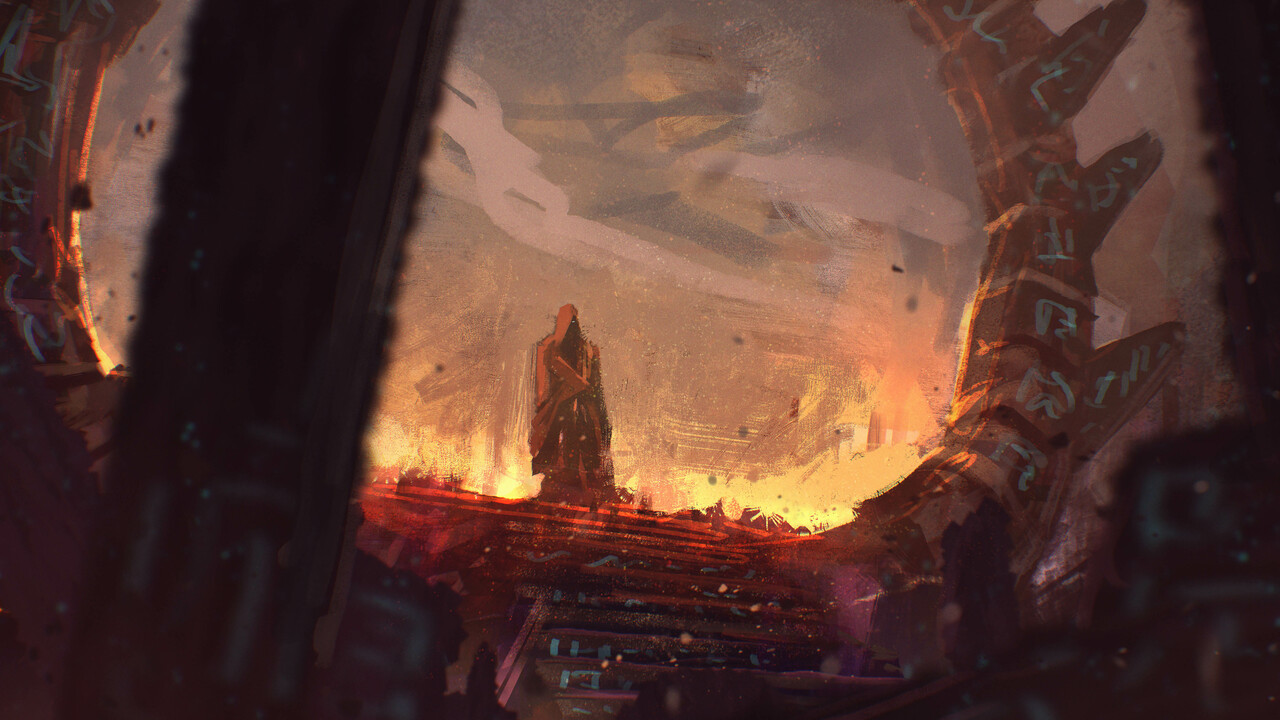 When Atlas realized the horrible event, he ripped off of himself the land portions that were still untouched by the disease-like presence of Nhemess which was turning the landscape into a lifeless field. He then lifted them up in the air above the giant ocean of gas created by Nhemess' forces. These continental sized floating land masses are known all together as Hevenia. The world above the clouds, the set of different skylands who survived Nhemess taking over Atlas. It was here when Atlas knew he needed to empower a set of protectors to defend these lands and purge the world from the horrible fate that awaited him at the hands of Nhemess until he manages to recover. Atlas was loaded with an extensive system of some sort of blood vessels that carried his vital fluid across the whole world. This energy is the essence, or, Esnse as ancient civilizations used to call it. When these root-like veins come in contact with the surface, they turn into plants and trees of particular colors and shapes. Each skyland would have a core vessel in its deepest point. These cores are the mysterious magic sustaining skylands in the air. They play an important role in the lives of the characters I will talk about in the next post. 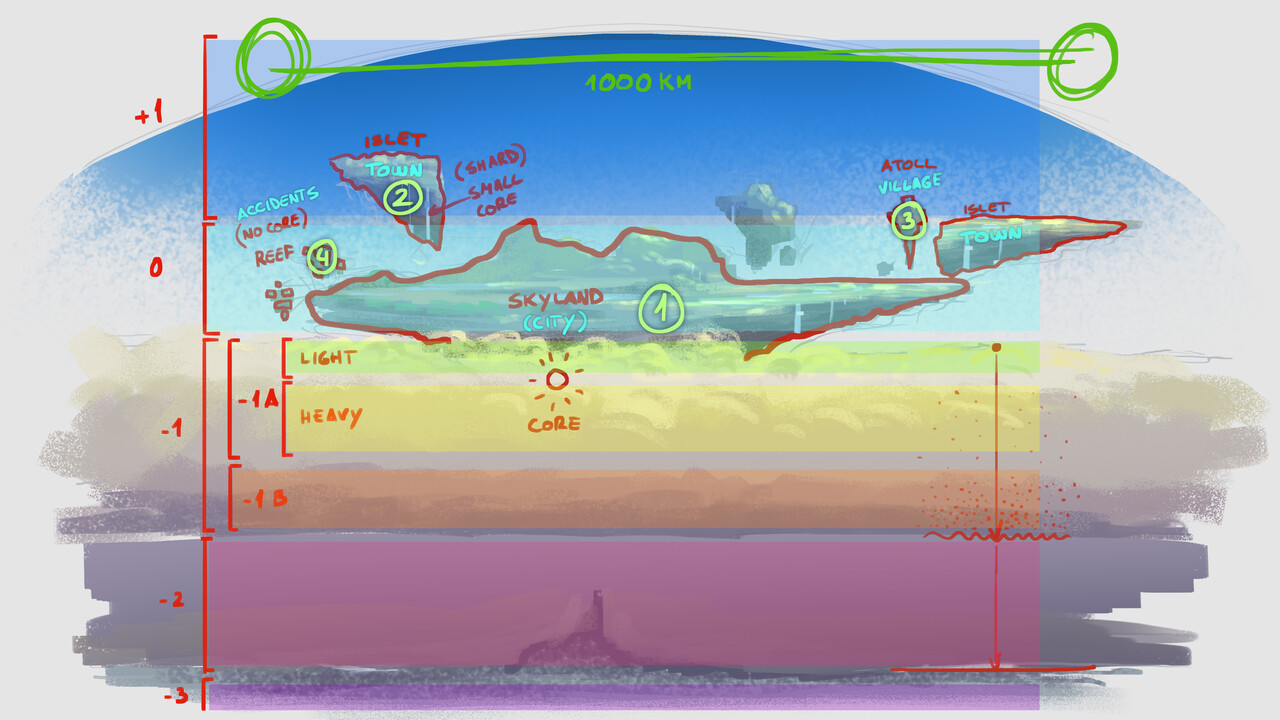 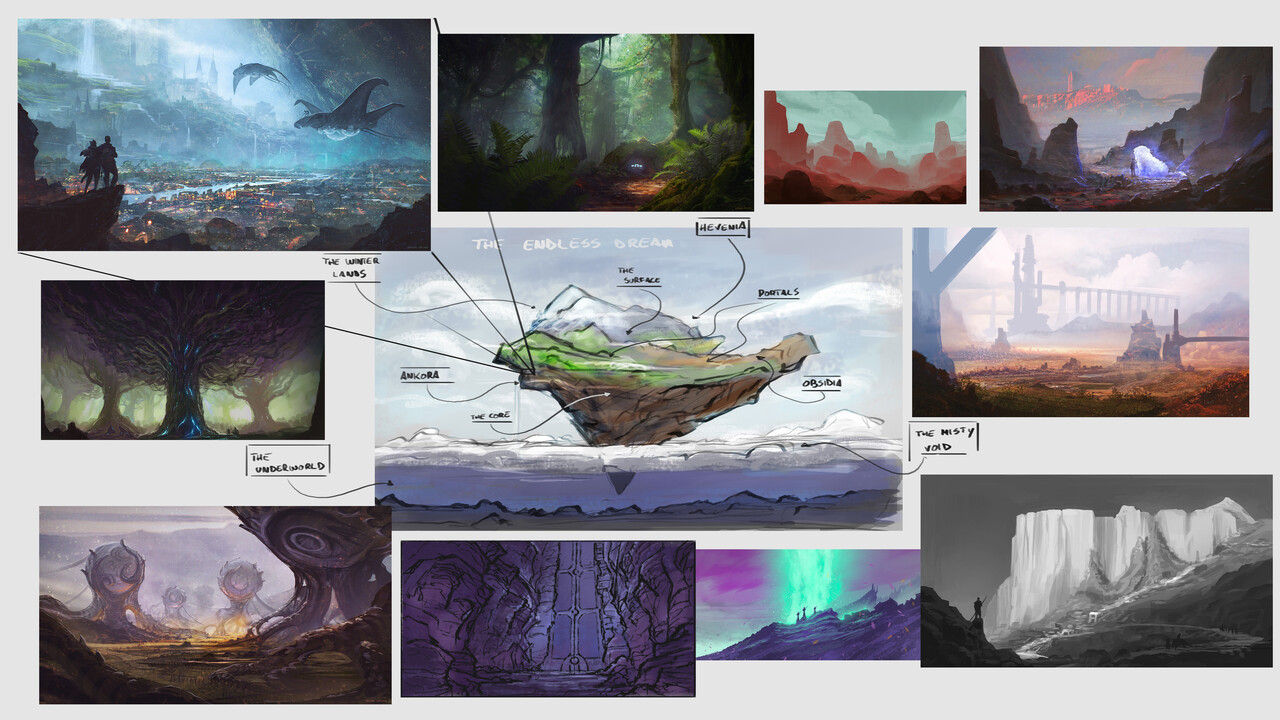 Rough world scale and structure estimations at an early stage. 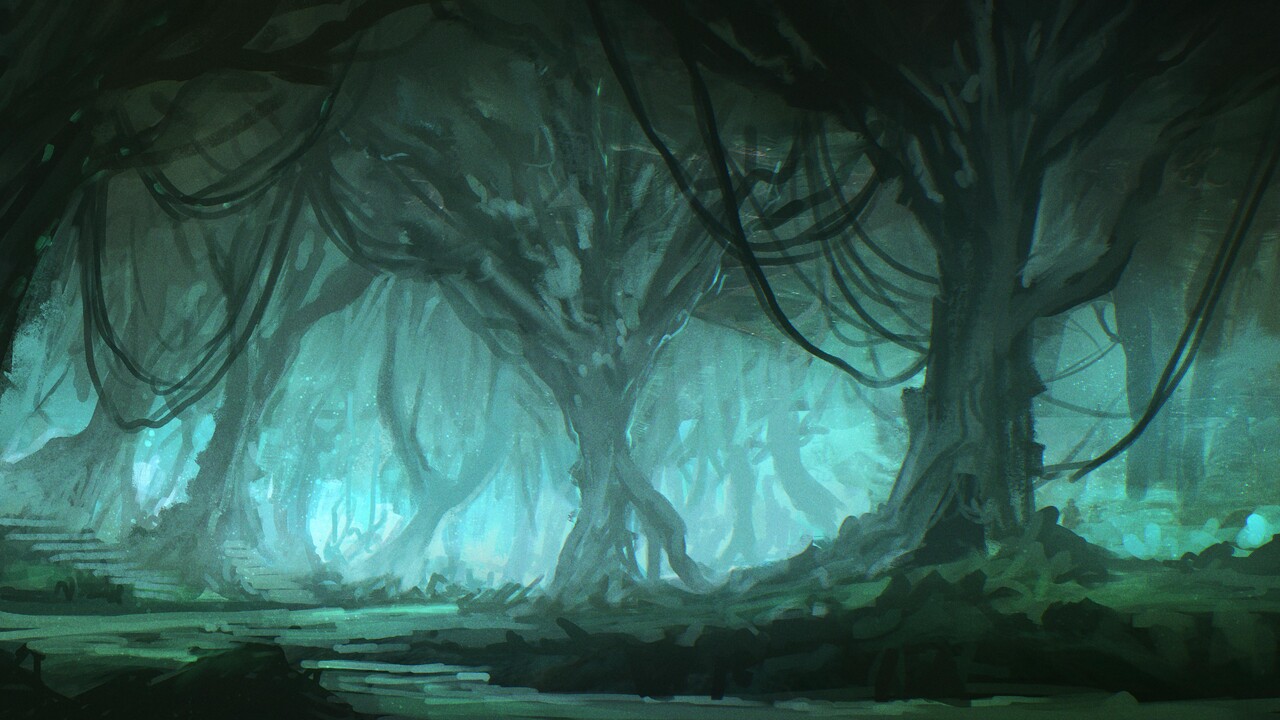 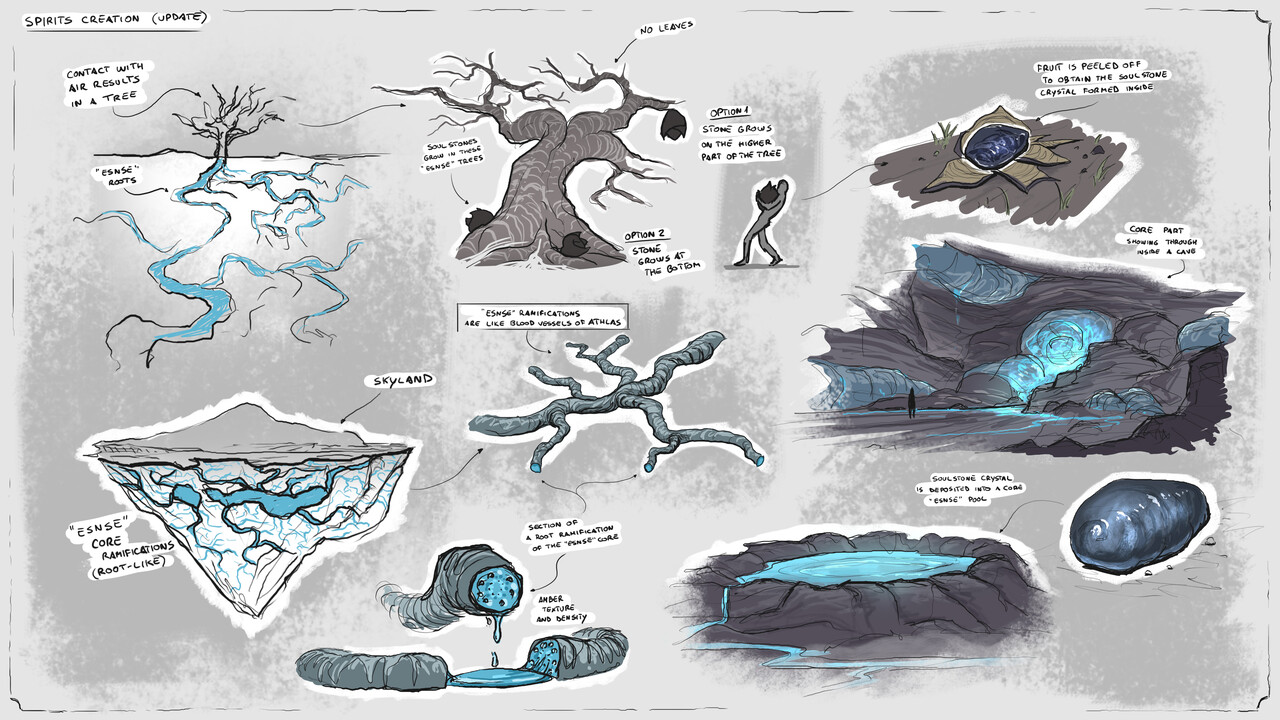 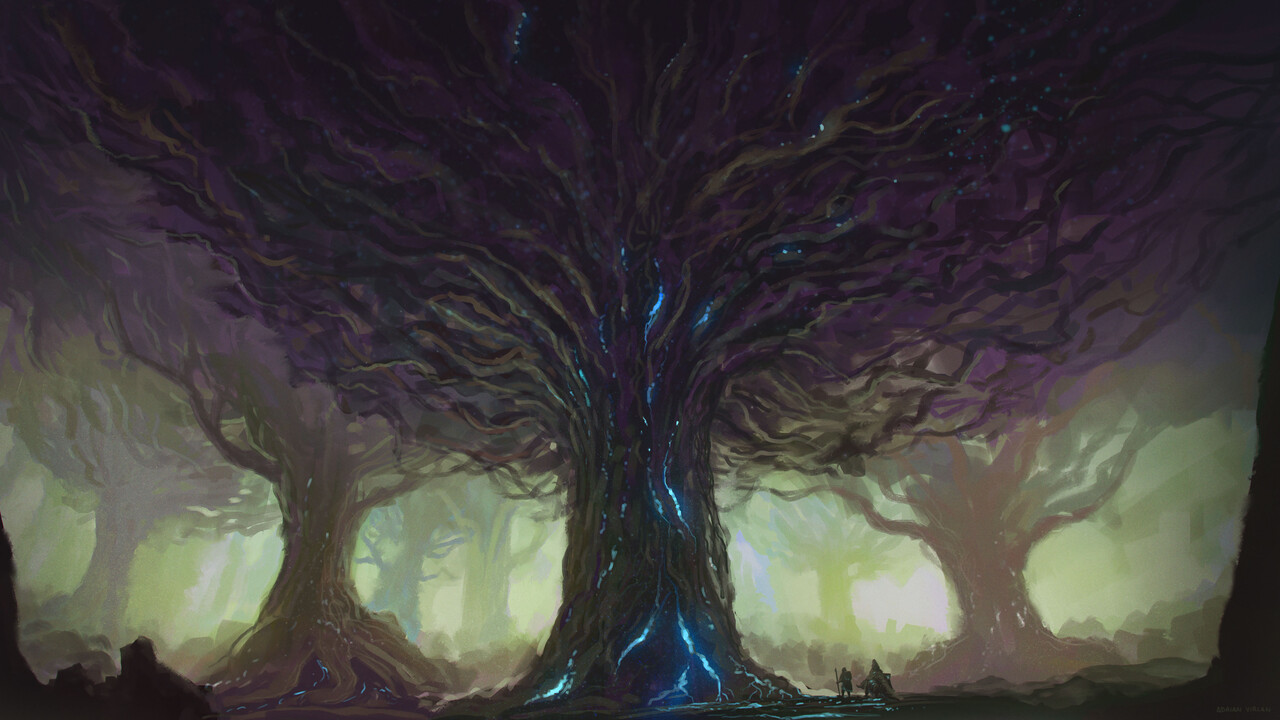 Shaping the essence. Portraying the trees with this energy and visualizing the big picture of the world, even the underground cores.

Thank you so much for your feedback! It brings me joy to see you guys are liking it so far. I'm so excited about this project as it is very special to me. I greatly appreciate your support and I can't wait to post more of this :D