Creating my first IP - 1. The Spark

I have never really thought of working on my own universe or anything similar to creating my own world with its characters and locations until 2014. Back then I remember I was sketching a tiger warrior character and worked around the concept for a while trying to visualize the world and the story. But I would get lost into different paintings and concepts that just led me to always end drawing things I thought were so random at that time. Now after 4 years I just realize not all of them were so random, as I keep looking back at them and getting ideas from there.

It is now 2017 and I am moving to another city for work. My sister just got a lovely little pup that I would only see on weekends when visiting my family. It wasn’t until I finished my job there at that company and came back home when I realized how much I loved this little guy. So it was an unusual foggy April morning back in 2018 when I decided to just go explore the mountains with my lovely white fluffy dog. That's it. This is how it all started. Once we came back home I sketched this idea that was roaming my head for a while back then. I imagined what would it look like if my dog was the big guy instead of me. I had zero intentions to start a personal project, build an entire universe or to shape what I now consider my first IP. All I wanted was to simply draw my dog. I am an artist and considering how much I love this little guy it simply felt wrong to me that he had never appeared on any of my doodles before. 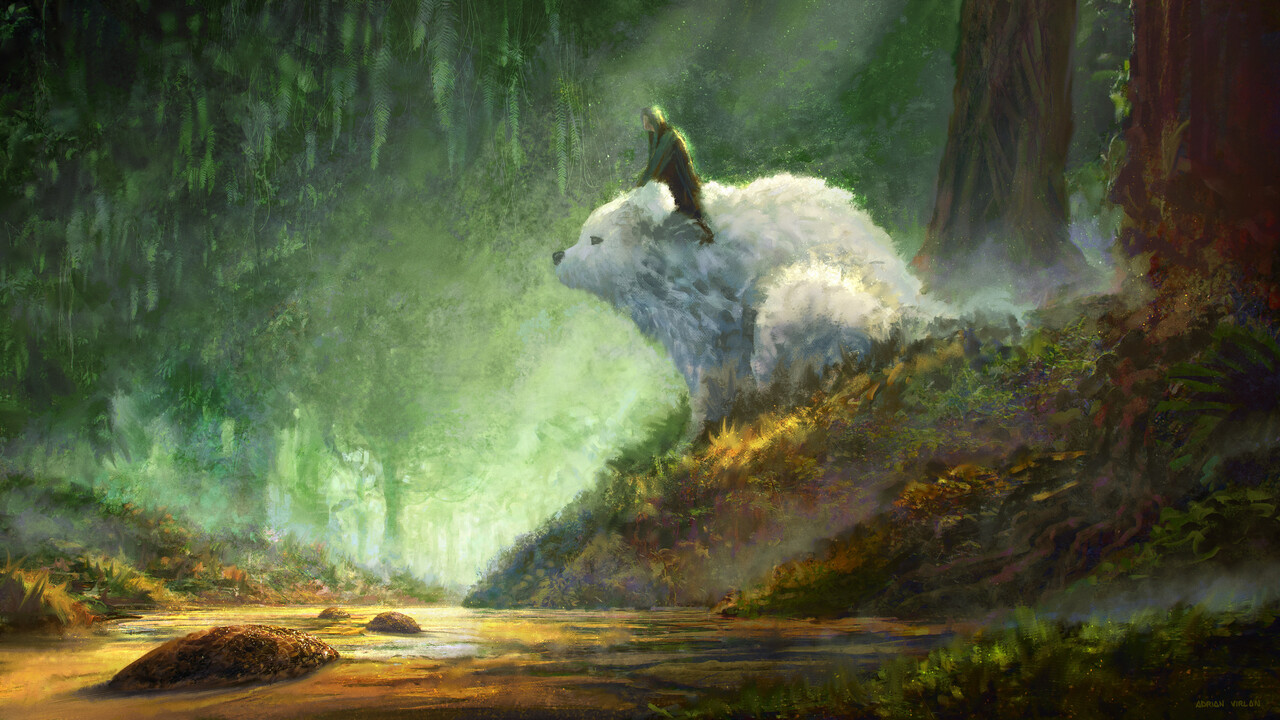 I kept exploring this piece as I pushed further by adding values, colors, textures, just to see what happens. And then, all of a sudden I had a finished painting. I just couldn't help but wonder: "Who the hell are these guys and what are they doing? Where are they? What type of beast is this and why is it that size?". I had lots of questions and I was getting so excited about this idea that came out of nowhere.

I actually made a video explaining how this first piece came to happen. Feel free to check it out :)

So as you can imagine, an avalanche of ideas flooded my imagination and many other character and creature concepts took shape within my sketches. I had absolutely no idea where all this was going but that wasn't a problem. Not having a goal with those drawings didn't bother me at all because the passion I had for the simple process of succumbing to my creative madness. The joy I was experiencing when sketching and imagining me and my dog within a fantasy realm was just taking over any concerns I could have in life.

Bit by bit, these two characters started to earn themselves a background story. I couldn't see any details yet but one thing was sure: it was going to be about companionship. Union. It was going to be about the special bond between two souls. Friendship. And thus, I was slowly adding my favorite character and story archetypes to what would later become the kick-starting vision of my first project. 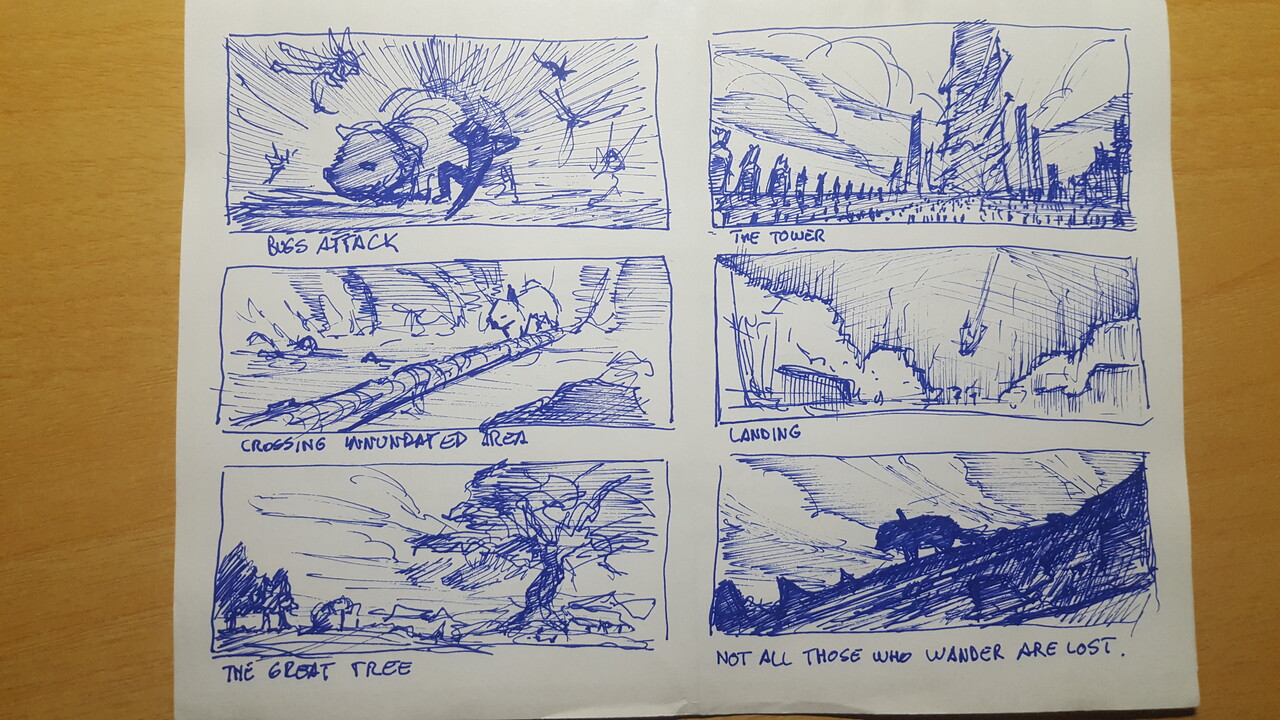 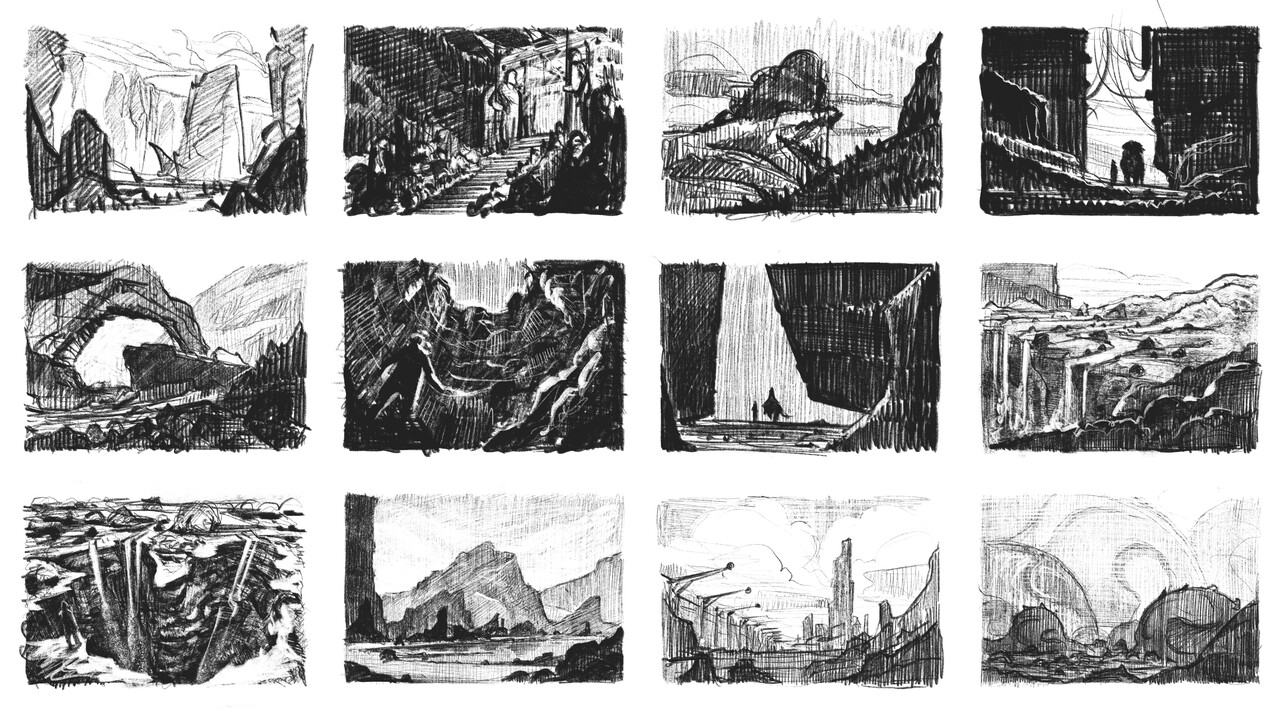 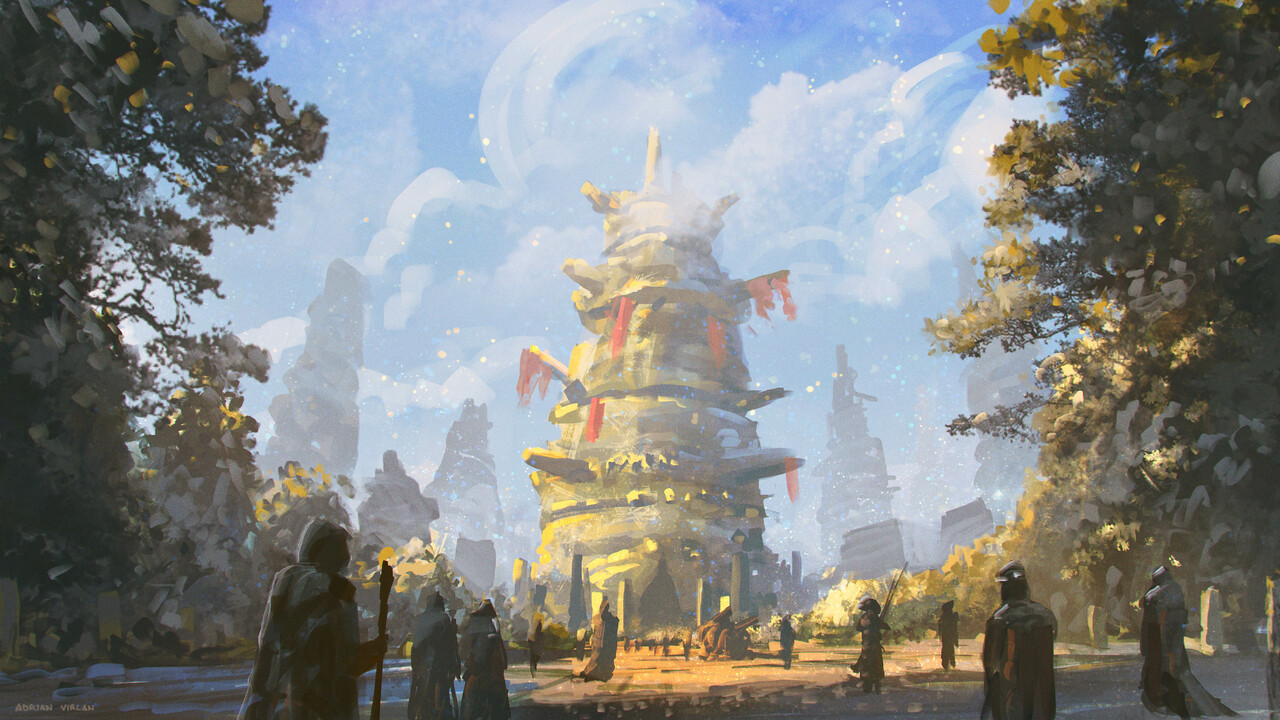 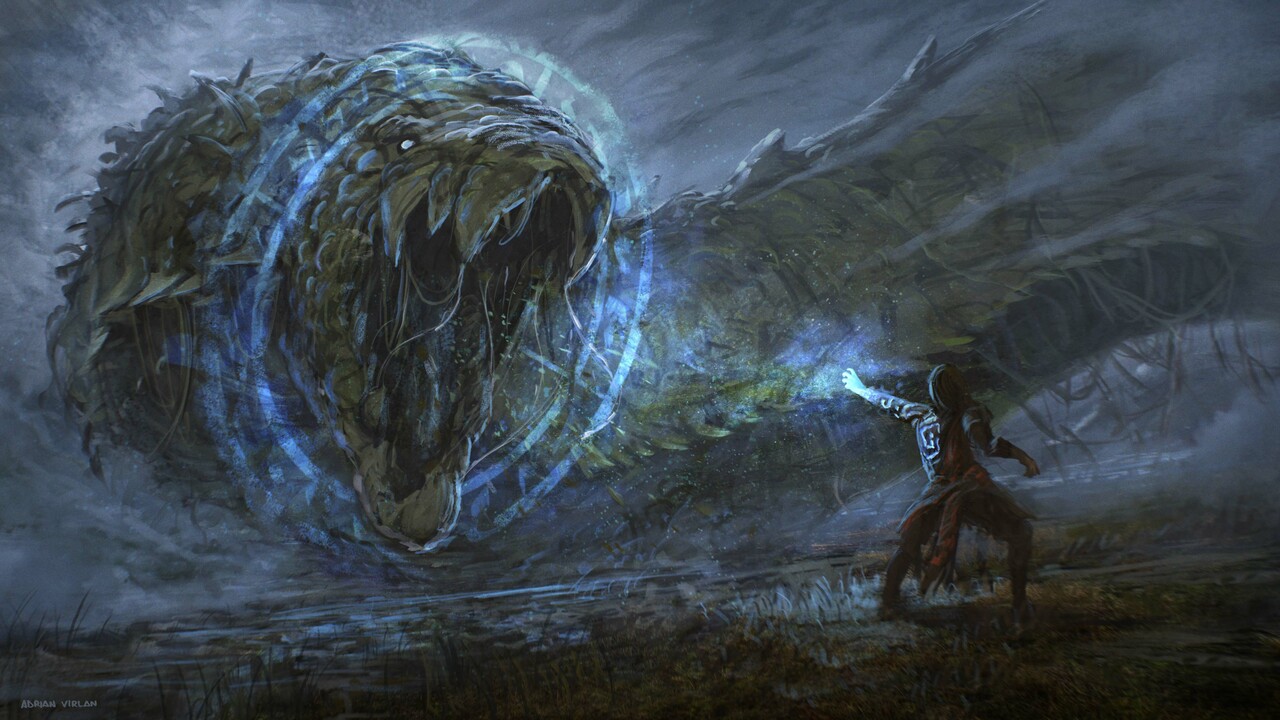 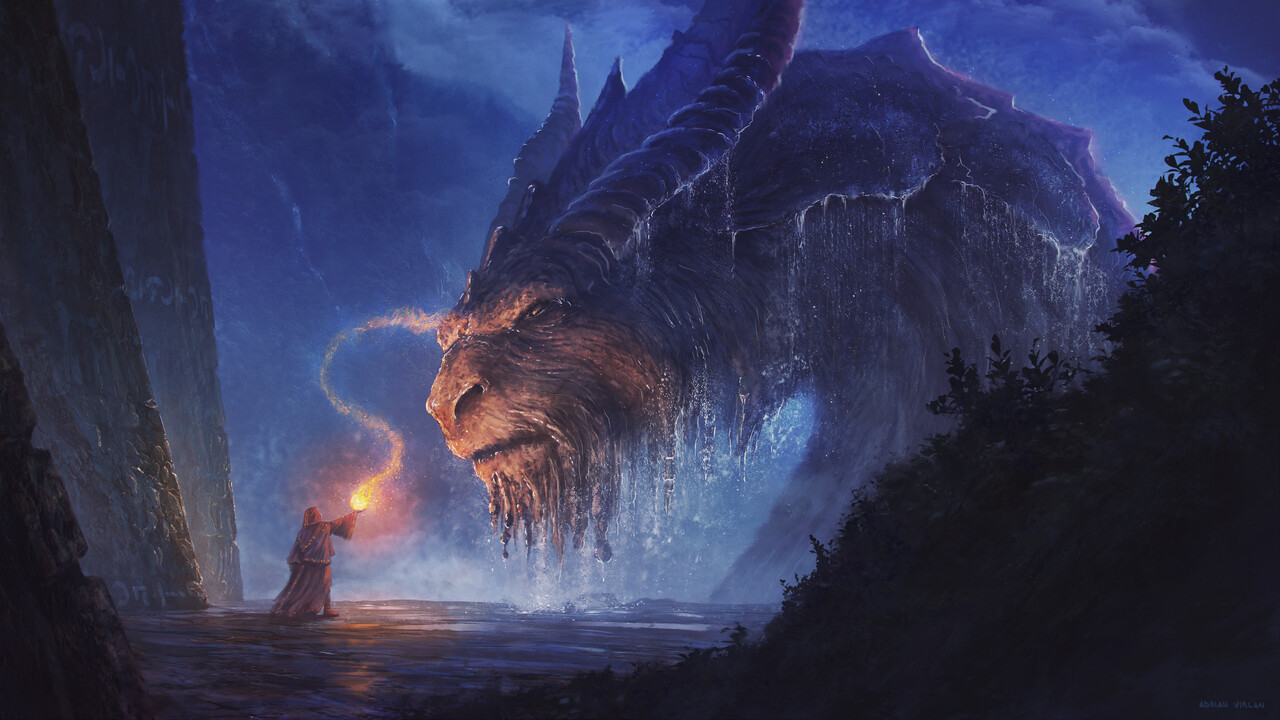 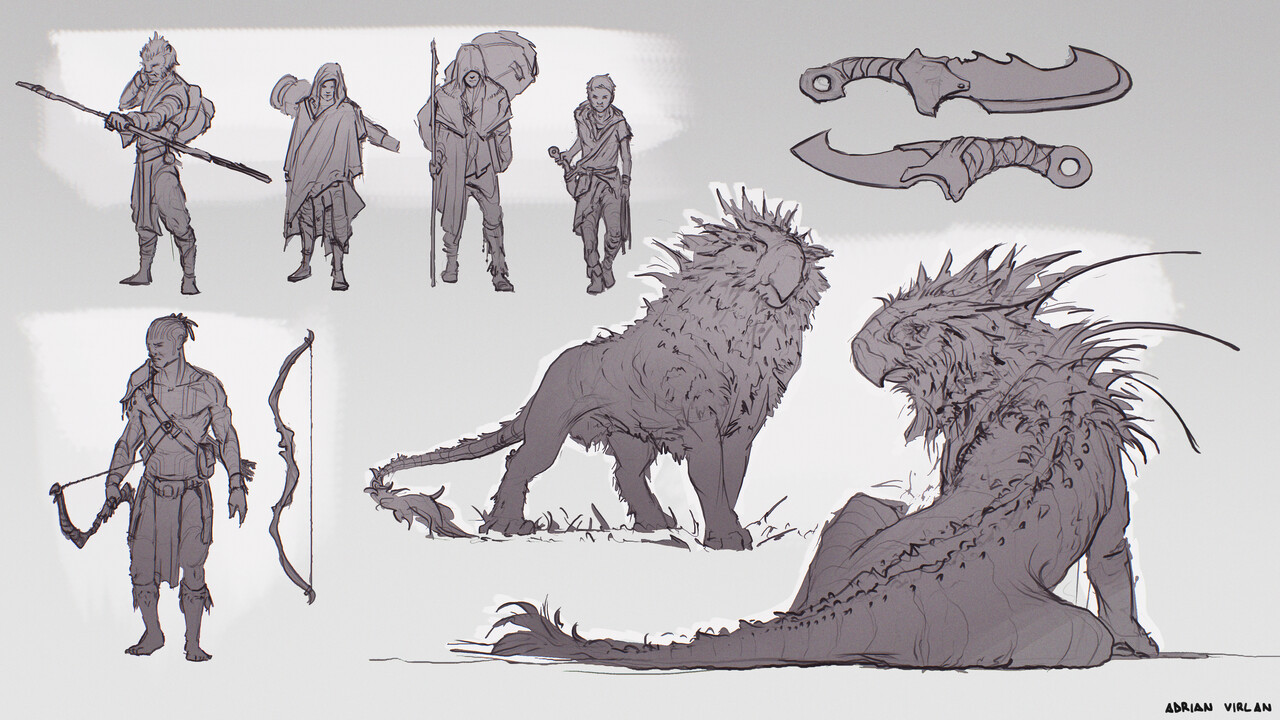 Experimental sketches and artworks exploring different subjects of the IP.

As I was exploring the project, trying to figure out the story and the plot along with the lore of the world, I was quite reluctant to open up about my project and the ideas I had in mind for it. I was working on some client projects with a friend, when he saw my personal sketches about these characters and this world I was creating. We worked together on client projects for a few years, and even on one of his own projects known as  "Sons of Dawn". He felt curious about my concept and started asking questions I had no answers for by then. My imagination was wandering from the received feedback, more ideas were hatching in my mind. Most of his interpretations were quite misaligned with what I had in mind, but there were a few things he got right and sparked my creativity even more. Here I learned the power of listening to all kinds of feedback.

So I quickly rushed to write every idea coming through my head, looking for a chance to visualize the big picture of this representation of good vs evil within this fantasy setting and implement it into the project. I would write day and night, breaking my mind to come up with something original. So after many attempts and hundreds of individual notes with details about the world and characters, I was finally rooting for a concept. And I can now confirm that you can only find this when you stop searching for it. I know... Sounds weird but this is how it was for me. 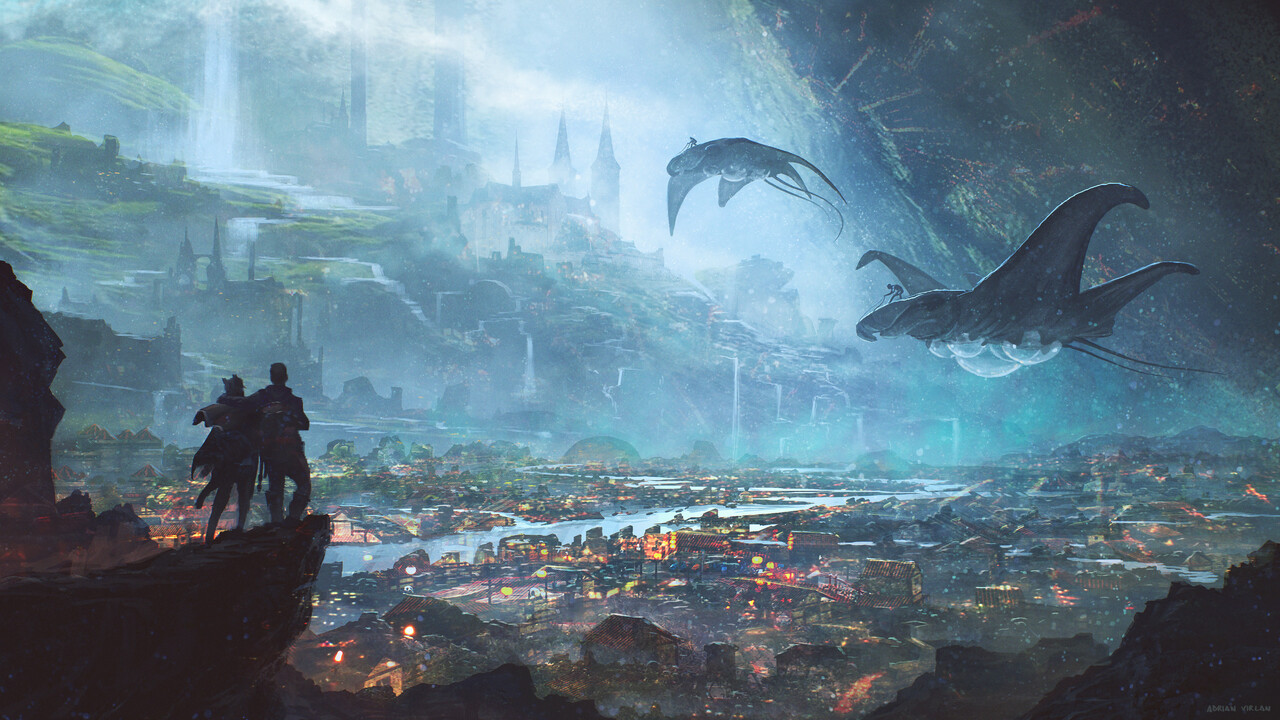 After writing down a whole big picture plot to explain how the world ended up in these conditions and circumstances, I asked for feedback again and I later decided to iterate the concept without drifting away from my initial idea. I was especially in love with the concept of dreams, and making them come real. This is how the idea of Dreamers came to happen. This was a thing that was being nurtured for a long time during some conversations in the early stages of the project. I just didn't know how to fit it into the big picture. This is how the whole thing is related to the origins of the world and the mythology of these cultures. Many options were discarded story wise, and many iterations I applied to the world building process, but the backbone of all of this was still intact. I wanted to almost mirror myself through these characters, probably even embodying different aspects of my personality within different roles or even places based on my life experiences. Who knows? It is still blue sky!

Feel free to reach out and give me your feedback on this, I will gladly read your comments. Thank you so much!

I will make sure I get the next post done as soon as I can because I want to tell you guys about how the world was built. So stay tuned and have a nice day :D